Ivo Giolito, who died on 20 November 1992, son of Domingos Giolito and Maria Elvira Tradi Giolito, was born in São Paulo, Brazil on 10 March 1933. He was married to Cely Bertolaso Giolito and the father of Ivo, Jr. and Cíntia. He graduated in pharmacy at University of São Paulo in 1957 and was awarded a Ph.D in 1968. He became “Privat Dozent” in 1987, Associate Professor in 1989 and Professor in 1990 at the same university. In 1974, he started the operation of the laboratory for thermoanalytical studies, with the supervision of two Ph.D Thesis. He supervised, in total, one MS and nine Ph.D thesis. In 1976, Prof. Giolito visited the laboratories of Professor Wendlandt and had the several to establish several projects on thermal analysis. He had an important scientific production and presented several articles at scientific meetings. Concerning thermal analysis he is considered one of the pioneers in the introduction and dissemination of this technique in our country. He dedicated a large part of his academic activities to teaching analytical chemistry in undergraduate courses, a number of disciplines in graduate courses, conferences and seminars, especially on thermal analysis. He wrote six books on the variety of topics. Prof. Giolito was a member of the Associação Brasileira de Química and President of the São Paulo Section from 1982 to 1985. He was the brazilian representative of the IUPAC Analytical Chemical Nomenclature Commitee, Chairman of the XXIV-Congresso Brasileiro de Química in 1983 and of the II-Encontro de Termo Análise (II-ETA)(2nd Brazilian Thermoanalytical Meeting) in 1989. He was the first to propose the foundation of the Brazilian Association of Thermal Analysis and Calorimetry in 1987. He is succeeded by Dr. Jivaldo do Rosário Matos, his deputy for four years. Giolito was a very gentle and friendly man and extremely respected by all his colleagues. 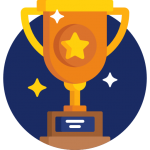 Resultados do I Prêmio IVO GIOLITO:

Icon by Freepik from www.flaticon.com